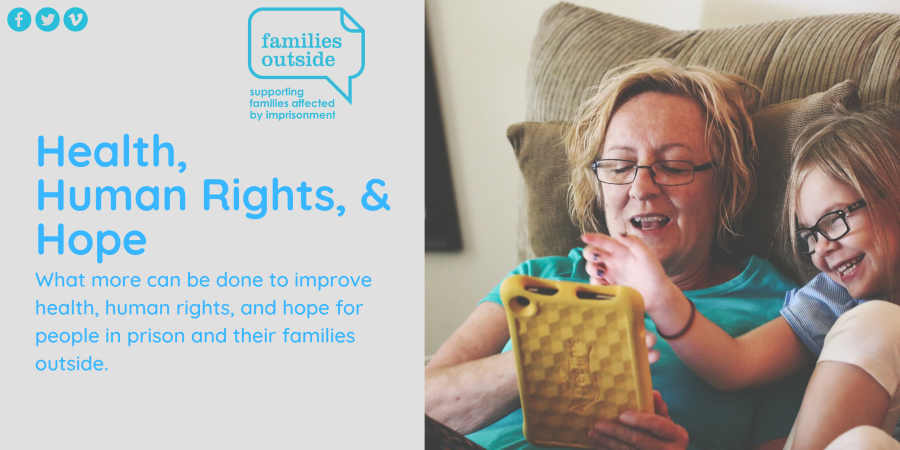 Families Outside is hosting our Conference virtually on Wednesday 18th November 2020.

The conference is free to attend and will bring together speakers and panellists who will discuss the families’ involvement in the care of people in prison, the impact of the pandemic on both health and rights, and what more can be done in the future to ensure the wellbeing of people in prison, and their families.

For more information download the Event Agenda and the Seminar Summary.

To reserve your place register now!

He has been instructed in some of the most significant, complex and high-profile cases of recent times. In some of these, including human rights cases at the UK Supreme Court, he has presented arguments which have helped to develop the law.

John chaired the Scottish Human Rights Centre from 1997 to 2005. That allowed him to develop a reputation as one of the leading voices on human rights in Scotland. This has seen him give evidence on many occasions on various issues to committees of the Scottish Parliament.

In 2014, he chaired human rights organisation Justice Scotland for a year, having been involved in the organisation from the planning stages years earlier.

He was Convenor of the Howard League for Penal Reform in Scotland from 2006 until 2018.

From 2015 until 2018, John was the solicitor member of the Scottish Sentencing Council.

In 2016, he was elected President of the Society of Solicitor Advocates, having been the Vice- President (Crime) since 2008.

John has completed work in chairing three independent reviews for the Scottish Government.

In 2015, John chaired an Independent Advisory Group on Stop and Search at the request of the Cabinet Secretary for Justice. This Group reviewed the practice of non-statutory (“consensual”) stop and search and produced a Report with 10 recommendations. All were accepted by Government and passed by the Parliament in the relevant sections of the Criminal Justice (Scotland) Act 2016. Thereafter, the Group continued its work on behalf of Government and, in 2016, they produced a Code of Practice which came into force in May 2017. John agreed to continue to chair the Group to review the operation of the Code after its introduction. This work concluded in June 2019.

He also chaired an independent review of Biometrics in Policing in Scotland, again at the request of the Cabinet Secretary for Justice. This report led to the Scottish Biometrics Commissioner Bill 2019.

He also chaired an independent review into the Impact on Communities of the Policing of the 1984/85 Miners’ Strike which reported to the Cabinet Secretary for Justice in October 2019. The Government’s response is still awaited.

Currently, he is chairing two other reviews – a major review of mental health legislation in Scotland and a review of the use by Police Scotland of emergency coronavirus powers.

An international human rights lawyer.  She worked on Human Rights and Refugee issues at the Quaker United Nations Office in Geneva from 1993 to 2015 and was part of the 3-year EU funded COPING project researching mental health and resilience of children of prisoners, and has also been involved in research on children whose parents have been sentenced to death, children of Roma and Traveller prisoners in Europe, and on women prisoners. She was actively involved in helping to initiate, lobby for and in drafting UN resolutions and standards including the UN Rules on the Treatment of Women Prisoners and Non-Custodial Measures for Women Offenders (Bangkok Rules), and the Revised UN Standard Minimum Rules on the Treatment of Prisoners (Nelson Mandela Rules), as well as in the UN Committee on the Rights of the Child’s Day of General Discussion on Children of Incarcerated Parents, and the UN Global Study on Children Deprived of Liberty.