All the latest news from Families Outside.

#NoAddressInThePress – Parliamentary Petition lodged Families Outside is currently campaigning to end the practice of printing the address of somebody who has been sentenced in Court. At the last meeting of the Scottish Parliament’s Cross Party Group on Families affected by Imprisonment a presentation was delivered on the campaign. At this meeting the Cabinet Secretary […] 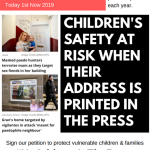 “They don’t care about my life, or my children’s lives, all they want to do is get a headline.” Family Member, Dundee. When a family member goes to prison the family feel like they’ve hit rock bottom, but when their address is printed in the press they have a whole new situation to deal with. […]

Families Outside, the only charity in Scotland that works solely on behalf of families affected by imprisonment, has shared its hopes on the back of the HM Inspectorate of Prisons for Scotland (HMIPS) inspection at HMP & YOI Polmont. HMIPS’s report clearly states that increased family contact actively improves reintegration into the community post-release but […]

My mum was released from prison, we weren’t prepared

My Mum was released from prison just before Christmas 2016. She managed to keep her own house, and therefore a few days before she was released we tidied up, cleaned, made sure she had a little bit of shopping in, like the essentials: bread, milk etc. Also I contacted her doctor for advice and found […]

27,000 children in Scotland are given new rights